Around the Earth Trust Farm, community reserves and even in our car parks you may notice that many of our hedges are “laid”, appearing almost as if they’ve been woven together.

To lay a hedge, a cut is made partway through the lower part of each shrub (or small tree), and the stems are then eased over towards the ground so that they lie horizontally. These are then held in place with wooden stakes and binders. This process allows each plant to produce more shoots along its length, and provides a thick hedgerow habitat for smaller mammals and birds – as well as helping to keep our hedges looking smart!

Back in December we spoke to three of our hedgelaying volunteers, Bill, Martin and Mike. Find out more in the video or read more from our interview below!

How did you meet? Was it through volunteering at Earth Trust?

Mike: Bill used to do hedgelaying with his grandfather as a youngster when he was down in the New Forest, so he knew the stuff. And then I came along and said I want to do something in retirement, so we came to Earth Trust and did Clive [Leeke’s] beginner course. Then we did his advanced course, and then we said to Chris [Chris Parker, Earth Trust’s head of land management at the time], “We didn’t’ finish that hedge on the advanced course. Would you let us finish it?” Chris agreed that we two could do it, and from then on we’ve done it on our own.

And when did you join the gang, Martin?

Martin: About five or six years ago. I met these two at Withymead and passed then whatever acceptance test they had for me and they allowed me to come and join them!

Mike: He was our “apprentice”!

And did you have hedge laying skills already?

Martin: Oh, absolutely none at all!

What do you all enjoy about hedgelaying?

Bill: It gets us outside, it’s a challenge.

Mike: Every bit is different

Bill: And it looks good when we’re finished

Martin: For me it’s the conservation side of it. Once were finished, the hedges are so much more valuable to wildlife, especially these days when there’s such a crisis on. Six years ago [when Martin started] it wasn’t really that urgent, but I think now it really has become urgent that we take care of the countryside, so that’s what I get out of this. When I get home at night, thinking “yeah, we did something for the environment”.

Can you talk us through the main benefits of hedgelaying, especially in terms of biodiversity and nature conservation?

Martin: I think the main thing is that as hedges get older they grow up very high and tend to have lots of room at the bottom. There’s lots of gaps, so then the mammals and things don’t like going through that because all the predators around. So if you knock them over they are thicker at the bottom, and then the mammals make use of that. And if you don’t cut back or lay hedges, then they can eventually die, so just keeping them under control is really important for biodiversity.

Mike: And by laying them down you create much more growth at the bottom, so that’s where wildlife can be supported.

Do you find that sometimes people can be quite puzzled by what you’re doing because they see what looks like chopping hedges down?

Mike: Massacre of a hedge! Yeah, some people check with us to say “what are you doing?” That’s absolutely fine because it gives us a chance to explain it and say that give it two years and it will be better than it was before. But initially it is quite bare, particularly for the first winter. But for the hedge we’ve done over there [indicates] – we did that last year and the amount of growth over the summer … in fact we saw a kestrel dive down getting a vole just by the hedge. So that proves the point.

Martin: We also like to leave standing trees [those too large to lay] which are really important for the birds like the yellowhammer because they need to be able to perch up high and sing to maintain their territories. Not everyone does this, but we very much leave them for the wildlife’s sake.

So are there lots of different ways that you could lay a hedge?

Bill: We do one style of hedgelaying and that’s the midlands style.

Mike: Or the “Nicholson style” – Bill’s special style of binding! 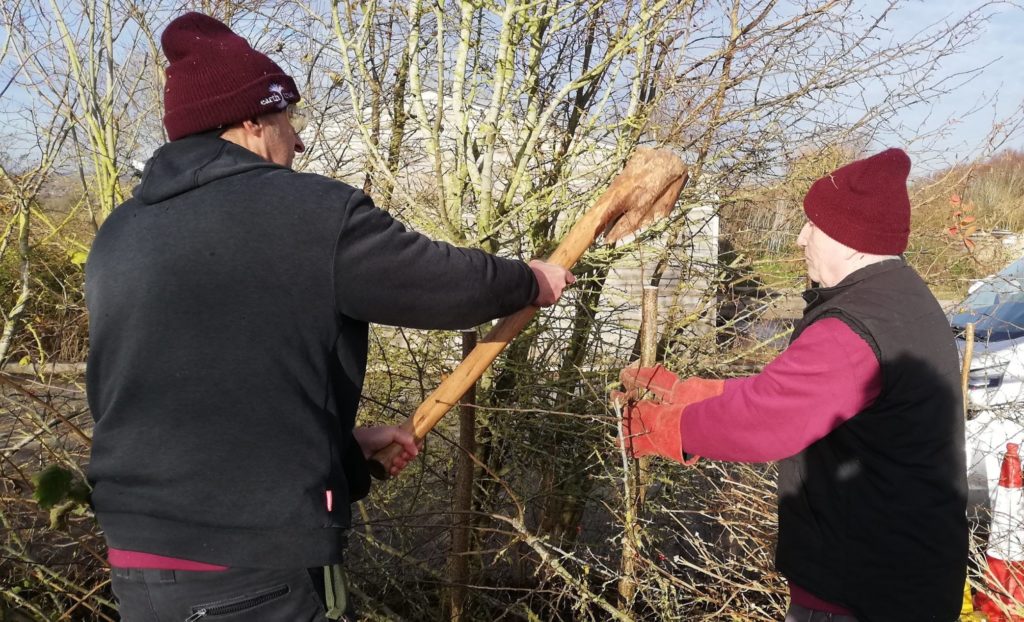 Obviously hedgelaying is quite a specialist skill – if someone was interesting in getting involved, what would you say to them about getting started?

Bill: We have people come to us and ask us what we are doing. They stand there and look, and I say, “Have a go”. And they will some of them.

Mike: And we usually say contact Earth Trust … It’s good fun – and it gets you outdoors, you’re in the fresh air, you’re learning a new skill and you’re enhancing the area for wildlife.

Bill: And anybody can do it. They can. Although they don’t think they can.

Mike: Yeah, but they can.

You may spot our hedgelaying teams, including Bill, Martin and Mike, out anytime between late autumn and early spring, as hedgelaying can be done through the winter up until birds begin nesting. If you’ve got any questions or would like to know more, please pop them in the comments below!

Find out more about hedgelaying and courses available from our Farm Step Tenant, Clive Leeke from Hedgecraft.

Getting ready for winter at Earth Trust

Over the winter months our green spaces go through dramatic changes. It can appear to be a quieter time where, like nature, we can hunker down until the warmer days of spring. In fact, the autumn and winter months can be some of our busiest, with activities like hedgelaying best done at this time. So, what might you see if you’re visiting over the next few weeks, and why are we doing it?

Conservation and maintenance volunteer Mike explains why he regularly volunteers at Earth Trust in his spare time.

Published December 2021 Although it might feel like winter is a time for slowing down, at Earth Trust it’s one of our busiest times of year! As the last of…