Over the last few months DigVentures have been working with Earth Trust to discover more about the people who lived here centuries ago. We’re excited to share that the finds have confirmed what previous excavations have suggested: that people have lived and worked here from the Bronze Age (c.2,000 BC) right through to the end of the Roman period (c.410 AD). Here are some of the latest finds. 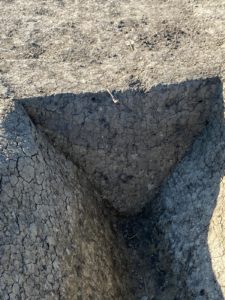 In the very last week of the dig, the team discovered a potential Bronze Age round barrow. It was thought that the large circular feature was another Iron Age roundhouse or enclosure, but further work showed that the circular feature was actually a ‘V’ shaped ring ditch measuring about 15m in diameter, much more typical of a Bronze Age ‘round barrow’.

The DigVentures team are still analysing this find, but if they’re right, this would be the oldest feature discovered at Earth Trust so far!

The Iron Age settlements cover 250m2 and include at least 10 roundhouses – some of which measure up to 14m across. Both the number and size of the roundhouses, as well as pottery fragments and evidence of large food-storage pits, suggest this was a bustling community, with hundreds of people living here at this time.

Time Team had previously uncovered a number of Roman artefacts, suggesting that a villa may have once stood at Earth Trust. DigVentures soon found it – a large Roman corridor villa. Although the outer walls no longer survive, a row of square, stone-filled column bases show us that the building would have measured at least 36m across. The excavation also revealed a Roman corn-drying kiln, which would have played an important role. Soil samples will be used to try and identify whether the kiln was also part of a maltings, which would suggest that our predecessors were making beer on site. 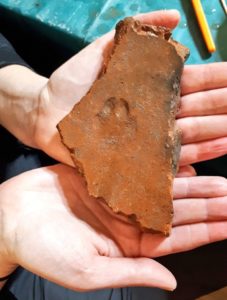 Fox’s paw print on a tile

Vast quantities of household pottery and kitchen vessels were found. They include a small spouted vessel which may have held more valuable liquids such as oil or perfume, a mortarium (for grinding or mixing dairy, herbs and spices), and part of a ceramic colander. The team looked for evidence of what kind of diet people may have had at this time, and found butchered animal bones and shells indicating that it would have included oysters, piglets and cows.

The excavation also uncovered part of a cemetery holding nearly 40 burials. Most are considered to be from the late Roman period and have clear rectangular grave cuts. With further analysis we hope to learn more about who was buried here.

Other artefacts include working tools (a Roman pick, a knife and part of a horse’s harness), personal items and clothing (such as a decorative brooch and a bone comb), and a handful of Roman ‘change’ – low denomination coins mostly dating to late 3rd and 4th century when activity at the villa seems to have been at its peak. There is even a piece of Roman roof tile with a fox’s paw print on it!

A special and significant place

As more finds are analysed and soil samples sifted through, even more detail will emerge about the people who lived here thousands of years ago. If you can, please donate today and help look after these special places that connect people today with stories of the past.

Celebrate Earth Day and stand up for green spaces everywhere

This Earth Day, we’re asking if you could stand up for green spaces and donate to our urgent appeal.

Find out ways you can support Earth Trust