Catching up with our migratory birds

Towards the end of March and early April some of our migrant bird species start to appear back in the UK, flying up from the south to breed here over the summer. Our wardens regularly survey Earth Trust places to see which species have arrived and how many there are, so they’ve always got the latest information on what you might see or hear out and about. Here they share their top spots for this month. 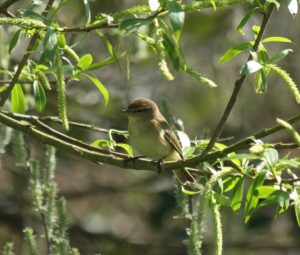 Chiffchaff – image thanks to Jo Cartmell

Chiffchaffs: This small warbler is a fast mover so you’ll need to be quick to see it. However, it also has a characteristic song which is much easier to identify. Listen for a bird call that repeats its name: ‘chiffchaff chiffchaff’. They can live across farmland, woodland, wetlands and in more urban areas too. At Earth Trust, you might see them in and around Little Wittenham woods and at any of our community reserves.

Willow warblers: Although similar to the chiffchaffs, these small birds have a larger supercilium (stripe above the eye). While the two species might look alike, the willow warbler song is very different as they sing in melodic phrases. The best place to see and hear them at Earth Trust is along the circular walk at Thrupp Lake which runs parallel to the Sustrans route.

Blackcaps: The male of this warbler species has a distinctive black cap, while the female has a more subtle chestnut-colouring. Its sweet song has led to it sometimes being referred to as the ‘northern nightingale’. The blackcap is primarily a summer visitor, but more and more birds from Europe are now over-wintering in the UK. These can be seen around the farmland and woodland at Earth Trust. 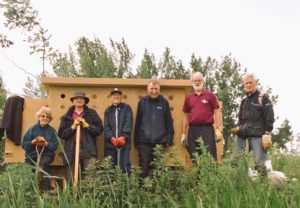 These two members of the hirundine (martin and swallow) family are both agile fliers, and are usually seen feeding in the air. The sand martin is the smallest of this family, and has a dark brown back and wings. Sand martins usually feed over water, and in fact our wardens have already recorded two at Thrupp Lake this year. Swallows are slightly larger, with dark blue backs, red throats and long tail streamers. They can be seen swooping over our grasslands and wetlands as they catch and eat insects on the wing.

Similar in build to the kestrel and sparrow hawk, the cuckoo has a blue-grey head, back and wings, and a ‘stripy’ underneath. Like the chiffchaff, although perhaps more famously, the cuckoo song sounds like its name – listen out for the distinctive ‘cu-coo’ call. Although the cuckoo population is declining in the UK and it’s now a Red List species, we’re lucky enough to have recorded a cuckoo near Thrupp Lake most years, so we’ll be keeping a keen ear out for it again this year.

Have you seen or heard any of these species yet this year? Don’t forget to share your sightings with us in the comments below or on social media!

Thrupp Lake, one of our community reserves, is a wetland wildlife haven transformed from its industrial past.

Our top picks for getting outside this spring

We know that the next few weeks and months will be challenging for lots of us, but we also know that getting outside is great for our well-being and still possible even with social distancing.