With flashes of colour and sweet smells, our image of the countryside often includes a wildflower meadow. But according to The Royal Botanic Gardens Kew, the UK has lost 97% of its wildflower meadows since the 1930s.

A wildflower meadow in the UK can be home to up to a hundred species of plant and support a complex web of invertebrates (from the soil to the tips of the tallest flowers), mammals, birds, fungi and a host of other wildlife.

The presence of wildflowers with nectar-rich plants helps support dwindling populations of native pollinators including butterflies, moths and bees, helping to sustain insects that pollinate our food crops.

Wildflower areas include food plants and egg laying habitat for the caterpillars that become butterflies and moths. Tall vegetation creates resting places for beneficial insects such as spiders, ladybirds and lacewings. These creatures help control pests in gardens and commercial crops.

Wildflower is also used as a source of food and nesting material for birds. Some birds like to eat seeds whilst some like to eat caterpillars and other insects. All of these can be found in wildflower meadows. Wildflower areas provide cover for amphibians such as newts, frogs and toads to hide in as well as a damp environment for them to forage in. They also support small mammals with cover, food (seeds and/or small creatures) and nesting material.

The flood plain meadows you are standing in contain a wide array of wildflowers. 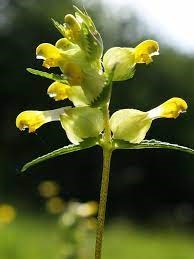 Yellow Rattle, also known as Hay rattle due to the noise the seeds make in the pods when plant is rattled. This is an annual as well as a parasitic plant – feeding off the vigorous grasses, it eventually allows more delicate, traditional species to push their way through. 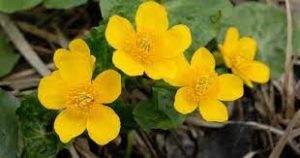 Marsh Marigold, often called ‘Kingcup’ because its large, golden flowers look like the cups of kings and because its Latin name, Caltha, is derived from the Greek for ‘goblet’. Marsh Marigold is one of the first wetland wildflowers to bloom early in the spring. This makes it a welcome early source of pollen and nectar for many insects such as hoverflies, the large bee-fly – a bee mimic – (Bombylius major) and the honeybee. On the banks of a pond or river, it creates an excellent ground cover and provides shelter for frogs and other waterside inhabitants. 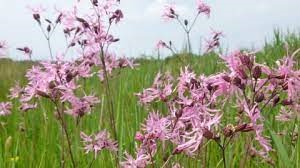 Ragged Robin – Ragged robin, Lychnis flos-cuculi, is a pretty native wildflower that thrives in damp soil including bog gardens, wet meadows and marshy ground. Once widespread around the UK, ragged robin is now rarely seen in the wild due to drainage and loss of wet meadows and ponds. The flowers are valuable for wildlife, rich in nectar and good for bees and other insects,. As a clever mechanism against attack, the stalk of Ragged-Robin is covered with tiny downward-pointing hairs that prevent small insects such as ants climbing up the stalk and attacking the flower. 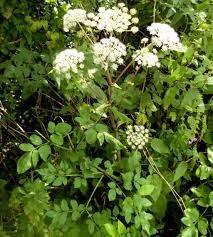 Wild Angelica likes to grow on the edge of woods or beside water. It is a common and robust plant of damp meadows, ditches and wet woodlands. As a member of the carrot family (an umbellifer), it displays large, umbrella-like clusters of purple-tinged flowers between July and September which are attractive to a range of insects. 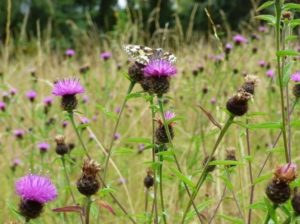 Common Knapweed is a tough, attractive, and easily grown hardy perennial flower, native to the British Isles. It’s a superb wildlife plant as the flowers are rich in nectar and pollen, and attract bees and moths, while the seed heads are popular with seed-eating birds such as goldfinches. It’s also a huge favourite of all kinds of butterflies, including common blues, marbled whites and meadow browns, and is sometimes covered in them. 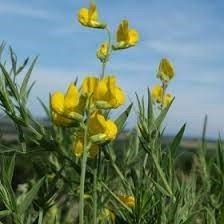 Meadow Vetchling is a native perennial of moderately fertile soils found in a range of grasslands including meadows, hedges, banks and unimproved and lightly grazed pastures. It is a member of the pea and clover family. Its scrabbling habit can result in it becoming locally dominant but this can be held in check through grazing. 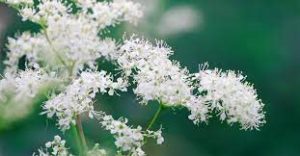 Meadowsweet is a wild flower that prefers damp conditions. The Tudor herbalist and botanist John Gerard called this wild flower the “Queene of the medowes” and described how it was used to scent people’s houses and “delighteth the senses”. Meadowsweet is the food plant for the larvae of several moth species including the emperor moth, grey pug, Hebrew character, lime-speck pug, mottled beauty, and the satellite. Many species of insects are attracted to the flowers.