Flowers and butterflies to look out for this month

With coronavirus restrictions still in place, many of us are turning to our daily walks to provide us with both physical exercise and a chance to connect with nature. April is filled with spring flowers coming out and sightings of the pollinators that rely on them. Here are just some of the wildflowers and butterflies that you might see this month. How many can you find on one of your local walks?

Cowslips: One of the best known wild spring flowers, these can be recognised by their tall stems which support clusters of yellow cup-shaped flowers. At Earth Trust you might spot these out at the moment in the wildflower margins as you head up sires hill, and at the top of the clumps on Castle Hill. There are also smaller patches at Castle Meadows.

Lesser celandine and violets: We’re starting to see flowers appearing in Little Wittenham wood now, too. Keep your eyes open for carpets of lesser celandine with its bright yellow flower, and purple violets appearing along the edges of footpaths.

Garlic mustard: Also known as ‘Jack-by-the-hedge’ this has just started flowering and is one of the food plants of the orange tip butterfly caterpillars (see below). It favours a shady position in woodlands and hedgerows. Growing up to a metre tall, garlic mustard has small white flowers that appear in clusters at the end of the stem, and heart shaped leaves with toothed edges (a little like nettles). And, as its name suggests, if you crush the leaves gently, it smells faintly of garlic.

Cuckoo flower (also called Lady’s Smock): Another delicate flower, so named as it comes out around the same time you might hear the first cuckoo call of the year. It’s another plant that provides an important food source for some of the butterflies below, including the orange tip.

Ground-ivy: Actually a member of the dead-nettle family, this creeping evergreen plant is found in woodlands and hedgerows. It has kidney-shaped, bright green leaves, and between March and June has violet/mauve funnel-shaped flowers which are popular with bumblebees. Fun fact! It’s also known as ‘ale-hoof’ and was used to clarify and flavour beer before the introduction of hops and modern clarifying agents. 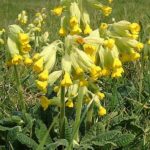 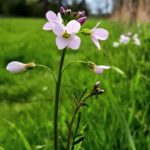 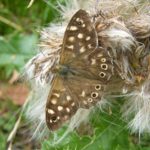 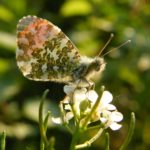 Orange-tip and speckled wood butterflies should start to appear soon, as well as peacocks, small tortoiseshells, red admirals and commas.

One that you might find easier to spot in early spring is the holly blue butterfly, as it emerges before other blue butterflies. It tends to fly high around bushes and trees, whereas other grassland blues usually stay near ground level. It is the commonest blue butterfly found in parks and gardens where it congregates around holly (in spring) and ivy (in late summer). The wings are bright blue and females have black wing edges. The undersides of the wings are pale blue with small black spots which distinguish them from common blue.

“Some species really stand out, like the peacocks or brimstones, but some are almost impossible to differentiate without a good look and unfortunately they don’t usually stay still for too long! A camera is a really useful bit of kit when it comes to working out what you’re looking at, particularly if it has a zoom so you don’t have to get too close.  Snap a couple of shots and then ID them later.”
Top tip from Warden Tim Read

A Green Flag site, Wallingford Castle Meadows is rich in wildlife and heritage as it contains the remains of a medieval castle.

Our top picks for getting outside this spring

We know that the next few weeks and months will be challenging for lots of us, but we also know that getting outside is great for our well-being and still possible even with social distancing.

Keep up to date

Sign up to receive our newsletter with information about our news, events, campaigns and achievements.